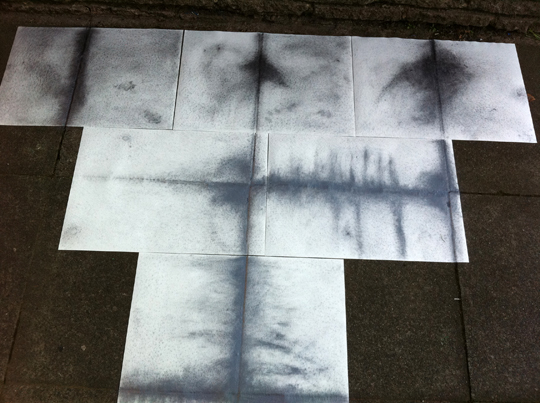 In the winter of 2012 Sally Labern worked for a month visiting Attlee Terrace E17 and the site of a murder to make a performative drawing work in response to the ‘silence’ surrounding the death of a teenager:

18 year old Wahab Zaaki was stabbed to death on Friday 13 March 2009 on a stairwell at the Attlee Terrace Estate, Prospect Hill in Walthamstow. He suffered a total of five stab wounds and died on the way to hospital. A friend was with him at the time of the attack was also stabbed as he tried to protect Wahab. This friend was witness to the attack but it wasnt until March 2011 that he identified the two defendants. Two men were sentenced separately on July 6th 2012 on charges including: on one count of murder, two counts of wounding with intent, and one count of manslaughter.

For many months there was silence within the community surrounding the murder and it took the distance of time and an ongoing enquiry to get enough information together to charge individuals. Before the final sentencing Labern worked on the site where Wahab last fell to create a work marking this difficult silence and the value of a lost life. The flats are built in a quad style with many flats overlooking the place where the attack took place.

Labern used the social media site Twitter on a #hashtag ‘Lost Edges’ to write during the making of this work; although a ‘public’ site, no one person took part in this monologue connected to the long held silence within this community, mirroring the complex reasons why, when such terrible things happen within a community, the witnessing and the responsibility of witness pulls people together in a silence that conceals the possibility of ‘natural justice’.

Silence was made by pressing powered graphite for hours at a time into A2 paper on the pavement at the site, both ‘picking up’ and by the deliberate orchestration of marks that created the panels for the the installation. Many local people came up to the artist during the making of the work and Labern deliberately avoided the questioning process that accompanies much contemporary ‘dialogical’ arts practice; people brought their thoughts, assumptions and ‘received ideas’ to the conversations which were not used by the artist to dig around or stimulate a voyeurism on the ‘real and fictitious’ accounts of memory relating to Wahab’s murder. People were markedly respectful of the transparency of the artist for the reasoning behind the making of the work. At no point did the artist contact Wahab’s family.

One response that stood out above all others was the recognition that this was ‘work’ – perhaps the long hours of the artist working and the difficult conditions, and the imaginative transmission of the subjectivity of the work to its laden content, in which the community’s fragmented knowledge became a mute but potent part of this quiet but performative work. So far this work has not been shown on the estate where Labern&Lloyd run the drawing shed, but has been part of a group show in the UEL gallery, Docklands, London.

The work remains unfinished, unresolved and Labern is to return to make another in 2013 with a planned showing of the work on the estate.

Labern creates interventions closely made with non artists, where trust and familiarity can lead to invitations to take risks in art making where the creative spaces and relationships made with participants throw up ‘edges’. It is this practice that she currently refers to as ‘lost’, making works that are driven out of that space. Silence was made on such an ‘edge’; the relationship with residents on the two housing estates where the drawing shed is based, allowed the space for this work to be made.