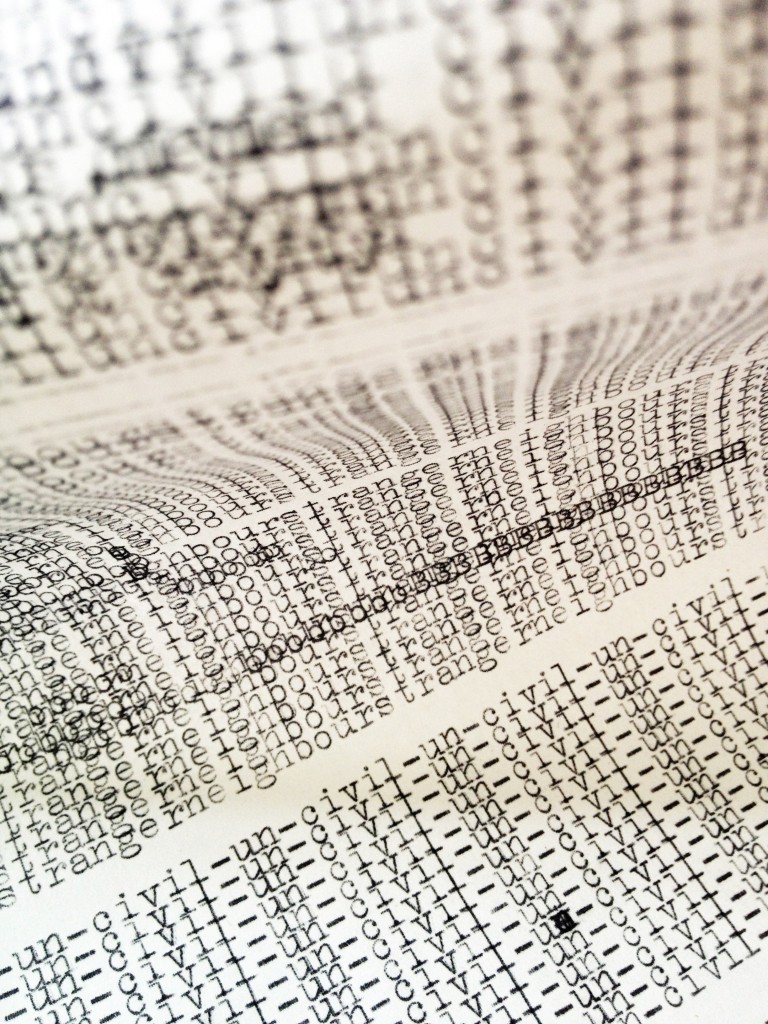 Black Light Open Studio at Tate Modern as part of the ‘Light and Dark Matters’ series Labern&Lloyd collaborated with scientists hosted by The Institute of Physics for the International Year of Light. Together the artists invited a large public audience to engage with practicing scientists in a day of Black Light and open critical dialogue and research. Framed by an installation drawn from the artists’ ongoing research into the hidden at this critical point in history, ultraviolet light revealed the disjuncture between extra-ordinary scientific explorations across the full spectrum of light and the endemic slow violence caused by human domestic light poverty across the world.

Labern&Lloyd chose the human labour and skill of hand cutting the paper stencils over a period of 12 hours, matching the year round daylight hours on the line of the equator experienced by many people living with the consequences of light poverty; exhibiting the three 5 metre x 1.5 metre prints, screened in the same UV used by the British Security Industry to track our movements, identity and money. The Public Typing Pool© with its antique manual typewriters fitted with invisible UV inked typewriter ribbons, welcomed the public to contribute to an ever growing installation of contemporary concerns, made from UV ink texts and drawings revealed only through the use of hand held Black Light torches.

Black Light returned to Bury Night Light in the Transport Museum, Bury, Greater Manchester in October 2015 when Labern&Lloyd papered out the total internal footprint of a goods lorry, flooded with UV black light to pick up drawings and body prints made by the artists in UV as a response to people trafficking; In parallel The Public Typing Pool© was set up in the Transport Museum with several manual typewriters also equipped with UV soaked invisible ink to test run a new process. Lit by hand held UV light torches hundreds of participants were invited to co-author texts together exploring the relationship between climate change, migration and the need for refuge.

Some[w]Here, Artists commission on Nine Elms estates, Wandsworth: an artist led project using diverse media including live art, film, object making and three symposia Some[w]HERE NOW and a zine publication, Manual for Possible Projects on the Horizon Autumn 2014 – Summer 2015 the drawing shed was commissioned by Wandsworth Arts Team, Enable and funded by ACE Grants for the Arts and Public Health in Nine Elms to run Some[w]Here across three housing estates, Working with residents, performance artists and ‘re-makers’, a series of small ‘useless’ mobile structures – drawing upon the history/culture of the Soap Box and Go-Cart – acted as platforms from and through which older people shared with young people the role of imagination in pre second world war street play and how this translated into survivability and the valuing of cultural difference within communities. Meaningful conversations across the estates, cultures and generations culminated in Some[w]Here Now – The Day of Small Conversations, at Pump House Gallery in Battersea Park on June 9, in which artists, local people, academics and interested others were invited to join the drawing shed for an open dialogue around how artists may work collaboratively with ‘local’ communities and in ‘public’ places, in the context of Now. This was preceded by three days of public SoapBox making in the gallery.

Artificial Sunshine: Black Light, installation commissioned by ASCUS Art & Science in April 2015 – Labern&Lloyd’s work travelled up to Edinburgh for the How the Light Gets in, an exhibition co- curated by the Edinburgh International Science Festival, Summerhall and ASCUS Art & Science, bringing together works by international artists intrigued by light in all its forms. Labern&Lloyd invited the audience, wearing black festival wristbands that hold texts written by the artists in UV, to step inside and alone, into a pitch-blackened shed in the Summerhall courtyard occupied only by the thick fog of a single huge humming black light lamp. The shed was a deliberate site for this iteration of Black Light, holding as the shed does, an ideological shadow of the personal, inventive, ambivalent, escape laden project space held at the bottom of the garden.

IdeasFromElse[W]here, June/July 2014, was a month long ‘arts laboratory’ space in Winns Gallery, Lloyd Park E17 co-curating 51 artists work with Jordan McKenzie, also using the grounds of the park (close to the estates) as spaces to make new work, try things out and enjoy a culture of making, ‘not knowing’, experimentation and performance.

Artificial Sunshine: Black Light installation, Bury Light night, Bury, Greater Manchester
Following on from the success of The Public Typing Pool©, Lloyd&Labern were commissioned to produce a light work for Bury Light Night, October 2014, which manifested in their Black Light artwork, Artificial Sunshine. Here the artists flooded the street and exterior of Bury Art Museum and Sculpture Centre with a ‘Smog of Black Light’ from 8 huge UV flood lights located behind metal barricades positioned in front of the Fusiliers’ Army Museum. Mirroring the spectacle of the world’s first 8 electric streetlights that marked the beginning of Blackpool Illuminations in 1879, and now in 2014, purposefully using the spectrum of light invisible to the human eye. From War to Art. The huge public audience activated the work, wearing their black festival wristbands printed with the artists’ devised texts holding extraordinary ideas in UV ink, or holding into the Black Light larger sheets of texts only readable when participants stood within and as a part of the work itself.

with The Public Typing Pool© and #civil_uncivil, sharing with artist Laurence Weiner the launch of the new Sculpture Centre. Using the donated manual typewriters, Lloyd&Labern worked with local participants unpicking Richard Sennett’s text: Together, to develop a ‘scored’ public performance on Twitter, exploring the civil and the uncivil and the importance of civil disobedience in troubling the construct of ‘Civility’. The artists also made new works across the four month residency.

Irregular Bulletin residency – Arlington House homeless hostel London /Space Studios
A six month residency with Arlington residents, creating a community workshop atmosphere around the ideological concept of ‘The Irregular Bulletin’ – inspired by avant garde artists and drawing from popular culture and radical forms of poetry – leading to a public exhibition on site, taking the form of placards carrying screen printed image and text created with residents as both a personal and political take on the world, alongside a pop up café during the Private View in partnership with City Dining, and the more thoughtful and profoundly beautiful series of ‘lost prints’.

Screens in the Wild residency – Twitter/Instagram live art project with Bartlett at UCL, exploring social media as a creative tool, holding complicated conversations around the issues of work, mental health and housing, inviting personal and network responses to questions of responsibility for homelessness. This was precursor to the drawing shed’s BasicSeven#7 platform events which took place in E17 in Waltham Forest as a series of critical and inclusive arts events / workshops /exhibitions and encounters on the theme of ‘homelessness, housing, mental health and work’, including support for a campaign to save the local soup kitchen February 2013 to January 2014.

Created by the PeopleLikeUs Collective as screen-printed posters across estate signage as part of the E17 Arts Trail. For three years, Labern&Lloyd used the existing signage that looms large and loudly punctuates the two estates, creating screen-printed text/visual posters with participants, developing skills of local people to forge deeper connections with their neighbours. These temporary Twitter-based ‘conversations’ changed the tempo of the public spaces, shifting them into ‘common’ space with Labern&Lloyd as artists negotiating the content of the posters as they were made, and working with residents – children, teenagers and adults – ‘to drag the poetic through the every day’.

Festival Here: a teenage girls-led intergenerational Festival, East London estates, led by the Young Women’s Estate-based Performance Project – the drawing shed’s project active since 2010 – with the support of Roisin Feeney, performance director from The Albany, and estate-based Friends’ group “…Ask Freda”. The festival centred around the girls’ new performative work that used film, Twitter and den-making, inspired by the girls’ use of the estate quad spaces to explore how teenage girls use ‘public’ spaces, how contested these spaces are (who owns them?), and how they can feel safer to use local spaces / streets – redefining and examining their rights to be more visible as young women within and across their own communities.

Heart of Doha Qatar – consultancy / visiting artists: Labern&Lloyd set up an international residency structure for a Found Objects project from objects retrieved from homes and commercial spaces before the centre of the old city, last occupied by migrant workers, was demolished. The commission included a brief for Doha artists and architecture students on a mobile drawing / project space and artists’ residency programme.

An Assembly of Opinions, The People’s Supermarket, London WC1; the drawing shed’s PrintBike work “An Assembly of Opinions” was shown throughout August across the window of the People’s Supermarket WC1. For the central window, Labern&Lloyd mono-printed images of food aid, barricades of white sacks, body bags, oil, as ‘one offs’ in repeat patterns on British newspapers carrying stories of world political crises. The use of mono-print acted as a contradiction to the continual occurrence of media reporting on the ‘natural disaster’ of man made world famine, creating a work that was eerily poetic – ghostly even – and drew the viewer in to read critical fragments of reportage juxtaposed with recurring world famine & so exposing / inviting the connections. Labern&Lloyd also workshopped with PrintBike as part of the Adhocracy Festival, August 6-7, 2011 @ Rich Mix, Bethnal Green, E1.

DuckHouse for East London park – Labern&Lloyd ‘re roofed’ the Langthorne Park’s Duck House in mono-printed tiles to create a temporary work for the London Borough of Waltham Forest as a part of the Fellowship Festival, cleverly built to include the hidden underbelly of the park’s debris concealed under a hand drawn-off veil of gold acetate suspended tiles, designed to only reveal prints of guns, knives and used condoms when it rained and became transparent.

Pentonville Prison / Southbank University: an immersive installation/workshop for Prisoners and Family day, on the theme of a Family Summer Picnic, drawn across the fully papered out Legal space and opposite, on each of the locked down repurposed ‘visitor’ tables.

2016 “Acting upon, and being acted upon, I do not act alone: Affect and Social Media: Desiring a plurality of Community” – paper – Social Media and Affect Symposium, UEL

2014 Presentation: Socially engaged practice, Conference hosted by UCL/Anchor & Magnet, London 2014-16 The work of artists and art in the community, and ‘Interrogating Thresholds’ Institute of Arts in Therapy and Education (IATE), London N1

2013 the drawing shed, presentation at: (Look At The E(s)tate We Are In), DIY summit meeting, Bethnal Green council estate, London E2

2012 The role of creative dialogue in fostering compassion within and across communities: paper for BAAT Conference: Compassion and the Image: Engagement with fear of affiliative emotions, The City Temple, Holborn Viaduct, London EC1

2014 Stranger : Neighbour poetry Anthology, including poems by Labern&Lloyd, with Arvon