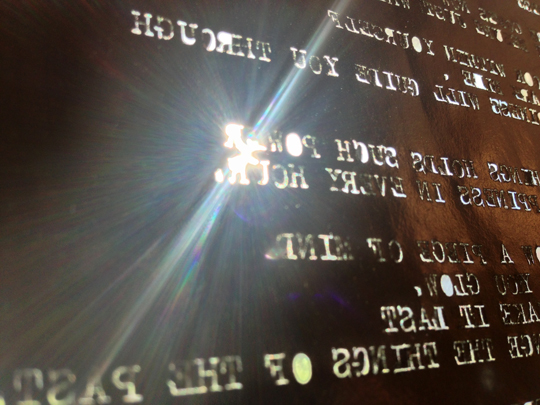 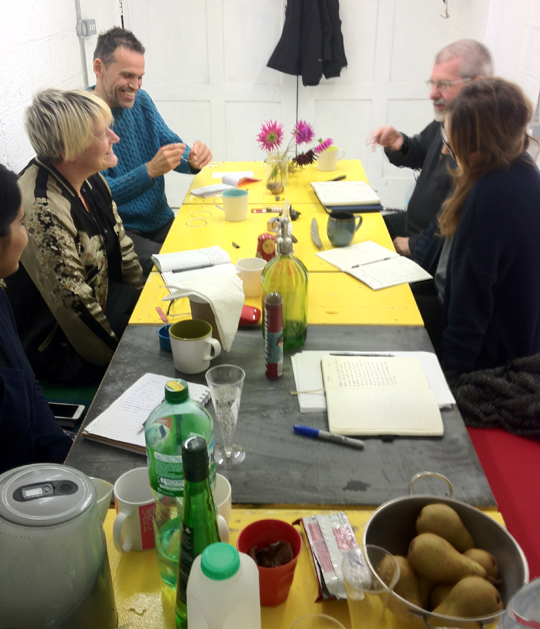 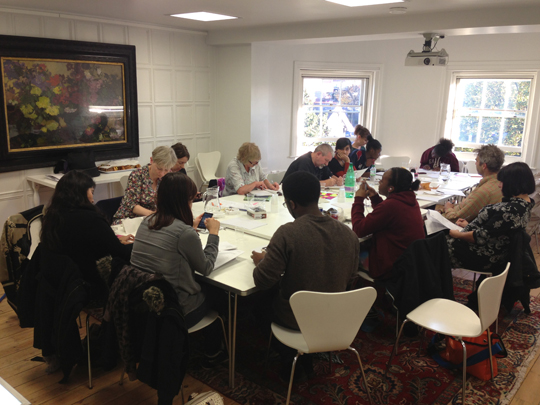 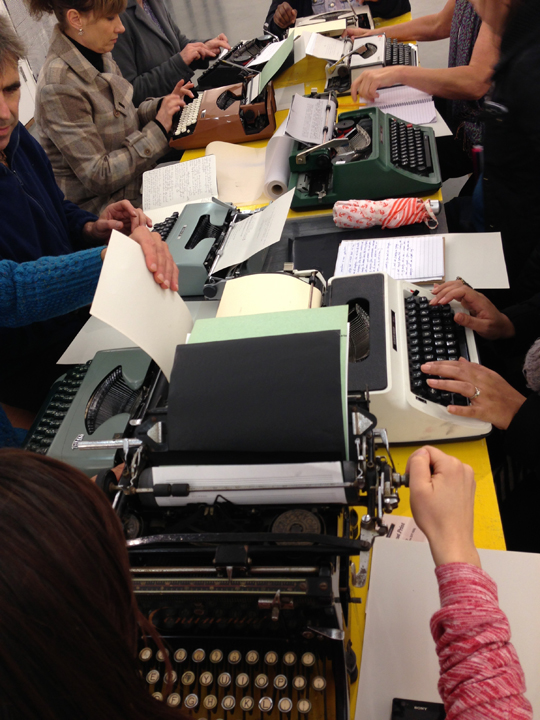 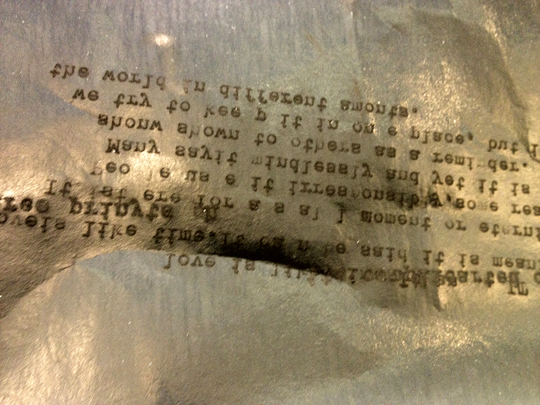 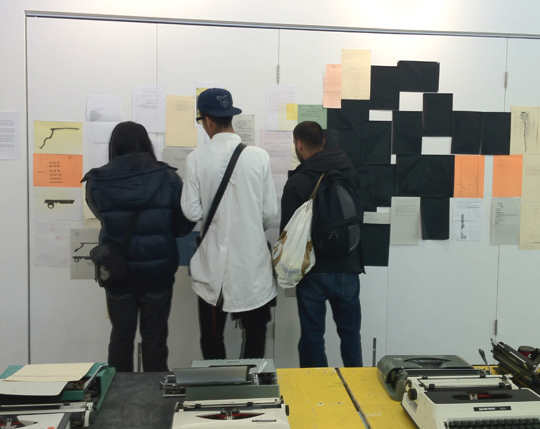 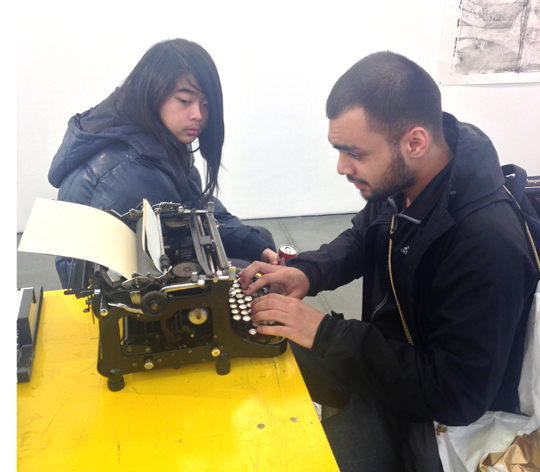 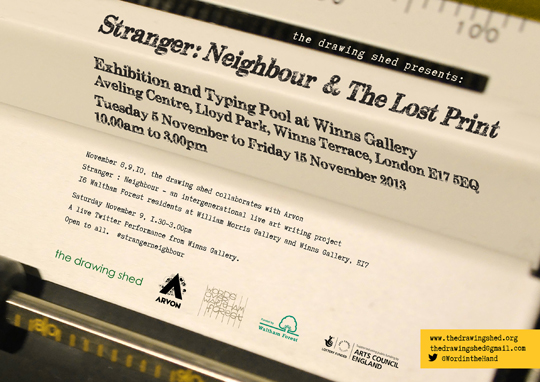 In November 2013, visual Artists Bobby Lloyd and Sally Labern from the drawing shed, inspired by their ArtAngel Open100 project, Sky.l.Ark, set up an exhibition and project space in Winns Gallery E17 entitled: “Stranger: Neighbour & The Lost Print”. With an enthusiastically received public Typing Pool of fabulous old fashioned typewriters and showing a series of trade mark screened ‘Lost Prints’ on archive tissue alongside a build up of carbon copies, Labern+Lloyd made new work in the space around the theme of Stranger : Neighbour. This references the split second changes in the skylark’s song, unheard by human ear which delineates recognition of stranger and neighbour, of threat and territory, of warning and welcome.

Throughout October 2013, the artists and writers Jacob Sam-La Rose and Nichola Charalambou led public inter-generational writing workshops in LockUpNumber11, the drawing shed’s new project space on The Drive estate, London E17  (courtesy of Ascham Homes) and in The Mill community centre and Walthamstow School for Girls E17. With national literature partner ARVON, the artists and writers also led a three day intensive writing residency in early November where participants worked individually and in groups, using pen and the ubiquitous exercise book and moleskin!

On Saturday 9th November 2013, 1.30 – 3.00pm, the drawing shed‘s Lloyd+Labern, #WOW festival micropoet @herbieherb  and Jacob Sam-La Rose, led a TWITTER PERFORMANCE using the hashtag #StrangerNeighbour. This was open to the writing residency participants, with the local community and ‘public’ joining in. With the core group following a devised  ‘SCORE’, we moved between exploring themes of home, stranger and neighbour – through the discomfort of the unknown, the comfort of the known and the merging of these two assumed places. Ideas, memories and observations were shared and then collided, tweets at odds, even dissonant, then echoing one another and ending in a respectful, slowed down rhythm. It was an extraordinary event, where people came together at Winns Gallery Lloyd Park E17 to sit around the typing pool, whilst others typed and many tweeted amongst the noise of machine but no human voice. In the silence that seemed to permeate the space despite all the ‘sound’, the ether emerged into a community space of the imagination.

As an integral part of the project, the drawing shed also commissioned filmmaker Paul Fletcher from e17films and Walthamstow International Film Festival (WIFF) to make  A SHORT FILM in response to ‘Stranger : Neighbour’ – which has led to a poetic response, using QWERTY from the typewriter keys and references to Hollis Frampton’s ‘Zom’s Lemma’ (1970).

Finally at Winns Gallery, the drawing shed  introduced an ’emergency shelter’ as an intervention into the gallery space, a physical/ideological object they are using in all their project work, both on and off the housing estates, and in settings across London and beyond the UK. 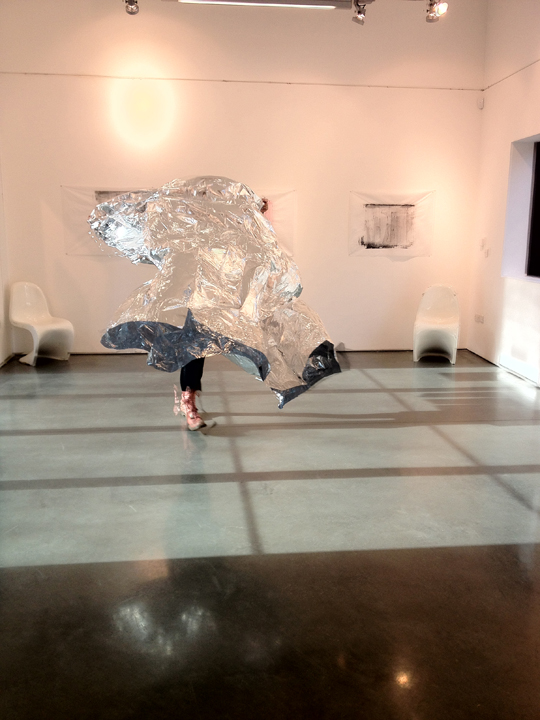 The project was open to residents of Waltham Forest. Limited Availability. £25 per person inclusive of meals. To express interest residents emailed Suzie.jones@arvon.org with a short personal statement (no more than 500 words) describing their reasons for wanting to participate and explaining how they hoped to gain from attending the three days of workshops.

Arvon is a national creative charity that offers residential creative writing courses for young people and adults, run at four rural centres in the UK. Many of the UK’s leading writers have taught on Arvon courses, including Carol Ann Duffy, Mark Haddon and Hilary Mantel. This course is part of a new programme of Arvon city non-residential courses across England with funding support from Arts Council England.