PrintBike – the mobile print workshop powered by its Brompton fold-up bicycle (and sponsored by Brompton!) has been working both on the estates in Waltham Forest and across London since Autumn 2010.  Currently it resides at Arlington, the large homeless hostel in Camden where the drawing shed is in residency with its Irregular Bulletin project.

In 2012, PrintBike worked hard at a local primary school in E17 as part of a series of Saturday printmaking workshops with families, during the Silver Jubilee street part on the estates and as well as took part in the E17 Art Trail in September.  2011, Labern+Lloyd were invited to take PrintBike into a number of diverse settings, from a park in a deprived part of  Waltham Forest to the heart of the City of London to the Peoples Supermarket in Lambs Conduit Street near Holborn (and to Adhocracy at the Rich Mix in Bethnal Green, August 6-7). These three pieces of work were visually linked by the astonishingly direct and equitable medium of mono-printing that engaged a vast array of people and led to the re-tiling of a duck house, the dressing of shop windows and fleeting words on a city square bench. 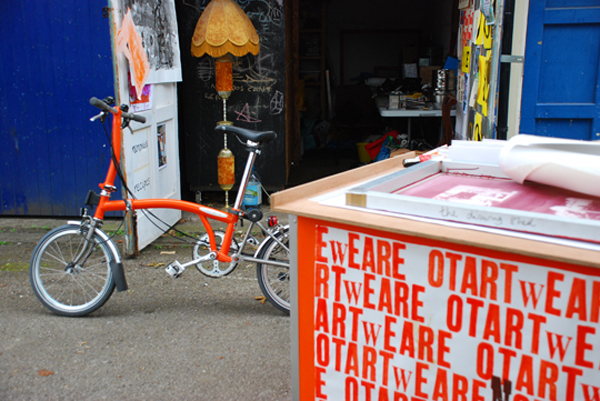 The PrintBike project’s conceptual intention in E17 has been to get individuals to physically move from one estate to the other so as to set up adult discourses using PrintBike. To this end, Studio Polpo designed a simple mobile printing-making trailer for the drawing shed, built in Waltham Forest and powered by an orange Brompton fold-up bicycle.

‘We have used screen/mono-printing as the main tools with which to trigger ongoing visual ‘conversations’ in contrast to the omni-present negative signage that loudly punctuates the estate. In agreement with the estate manger’s CEO – indeed, with whom we have discussed the project intentions in some detail – and with residents, we have slowly ‘taken over’ the over-blown signage to create different levels of discussion through which to explore and not exclude uncomfortable, potentially ‘critical’ voices within this temporary exchange. We anticipated that these voices might at times be discordant, and inevitably diverse, ranging from the descriptive to the poetic to the banal to the political, therefore moving back and forth between the external and the internal’.

‘We have involved a volunteer resident in two lots of training and we are building in more of this so that the residents themselves can start to co-lead creative workshops with participants linked to the signage project. Thus our developing competence as printmakers is beginning to be transmitted down to residents, a number of whom are now developing skills and realisable means of expressing their ideas, concerns and creativity’.

‘We are using print to encourage debate amongst residents across both estates, as well as for residents to explore experiences and language, and contribute to developing a sense of place and ownership in what has historically been a somewhat fragmented community with a documented low level of ‘well being’. 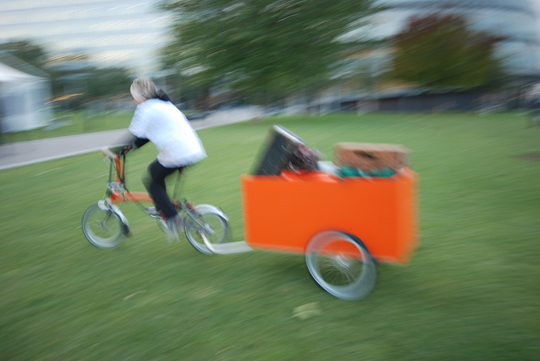 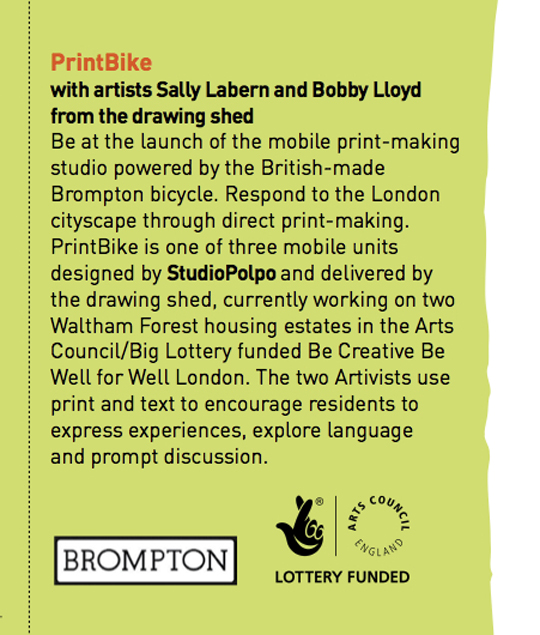 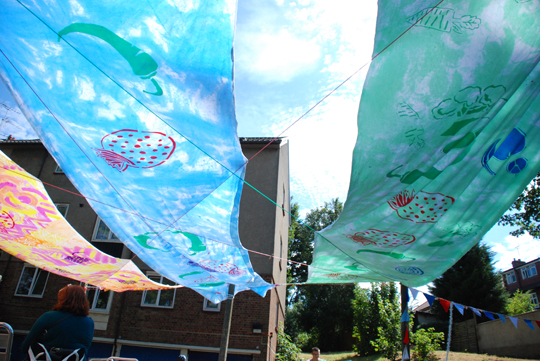 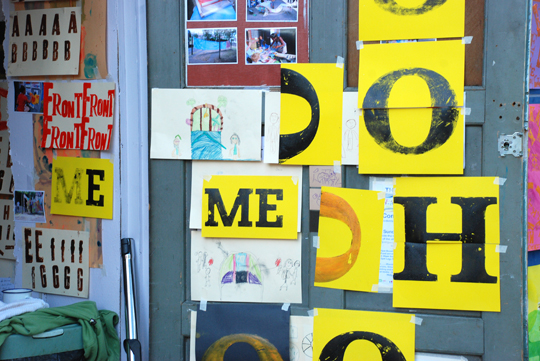 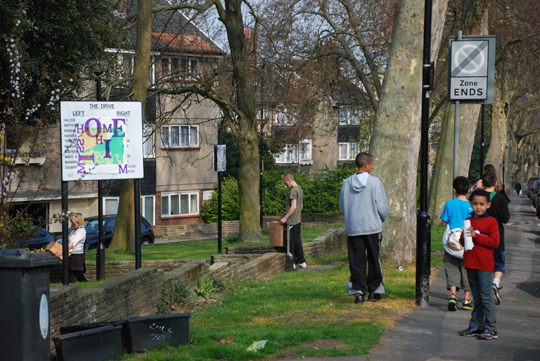 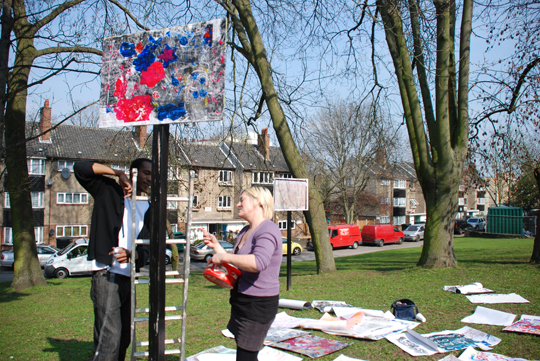 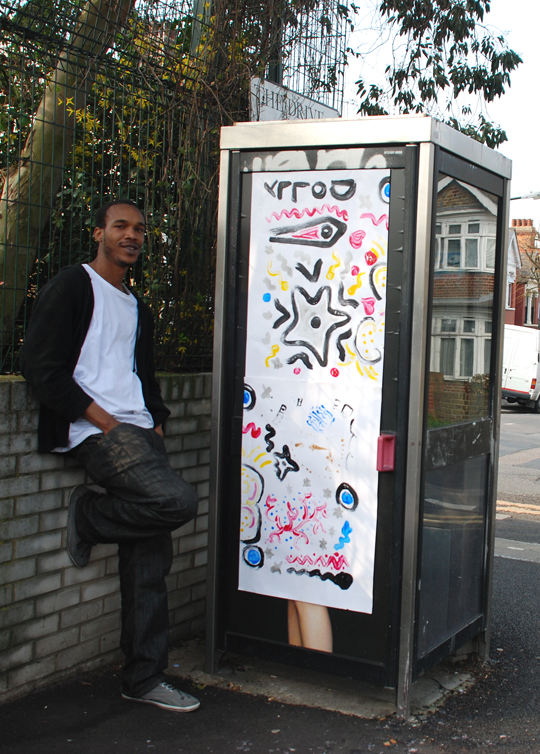 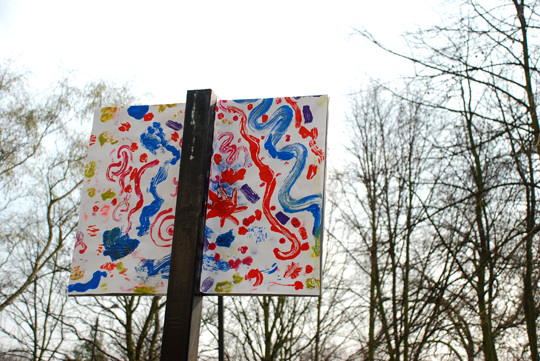 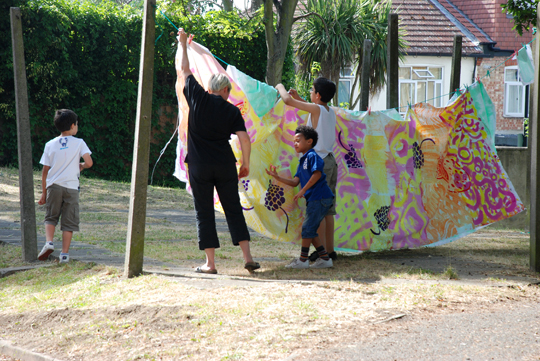