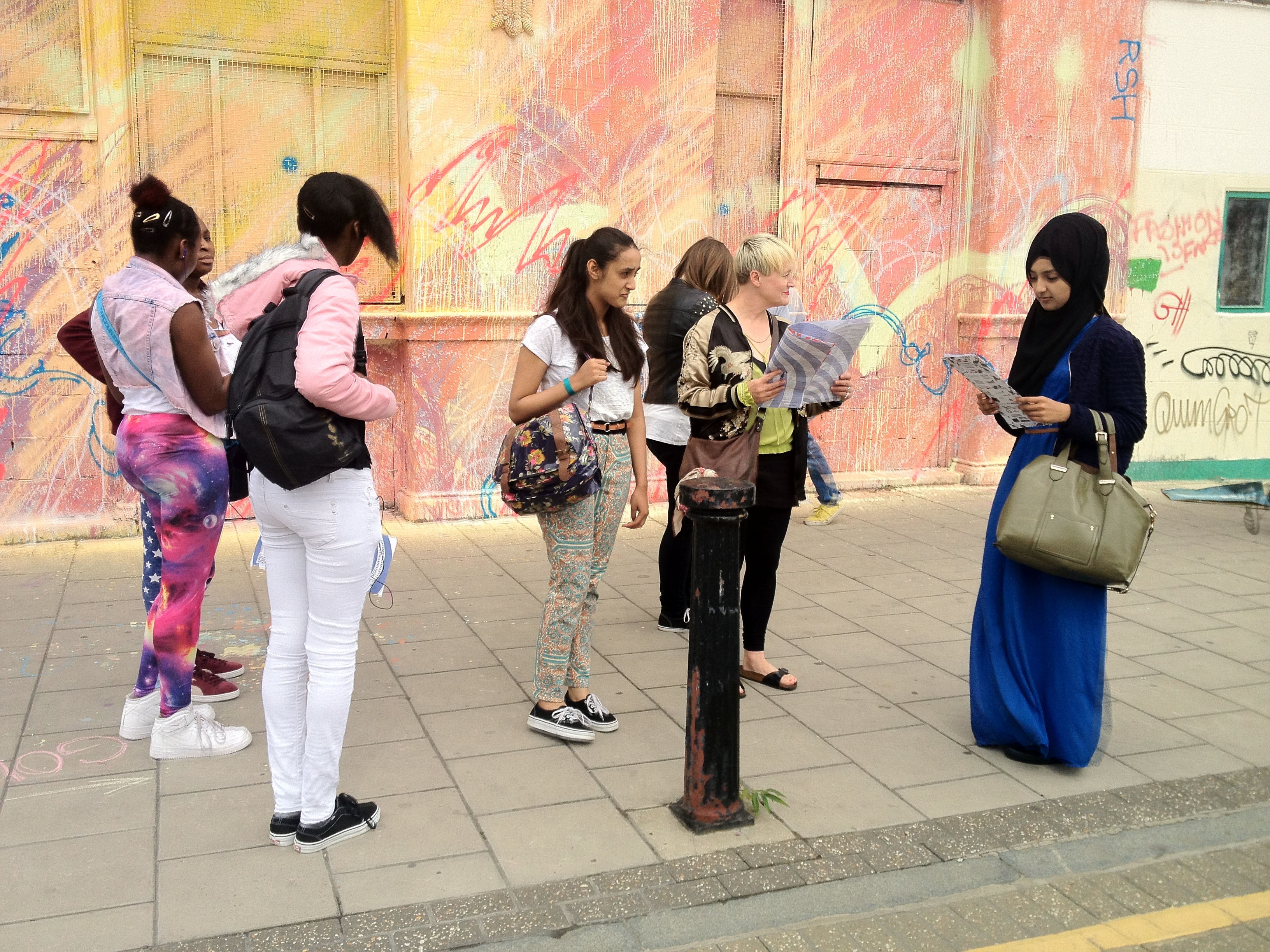 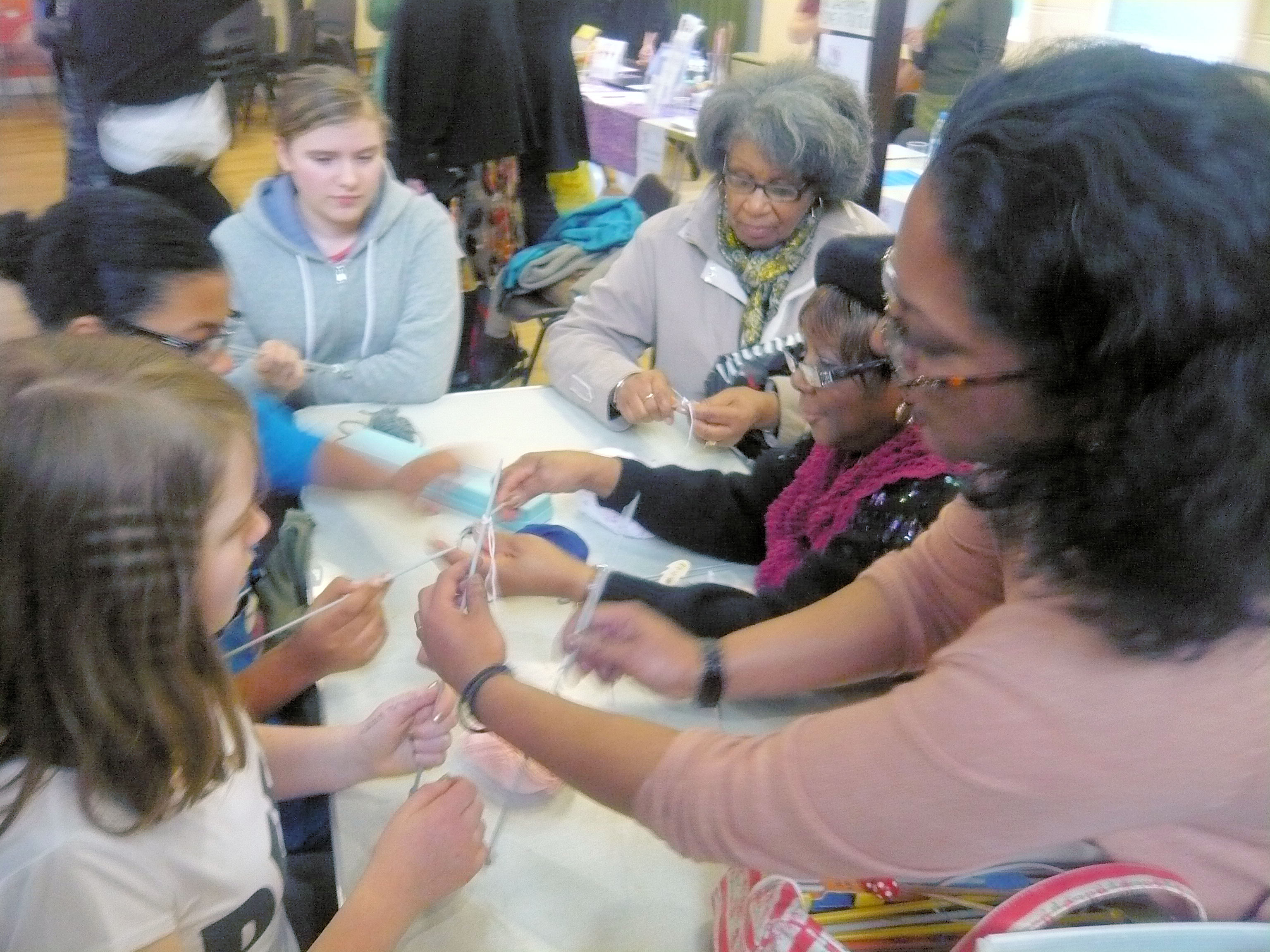 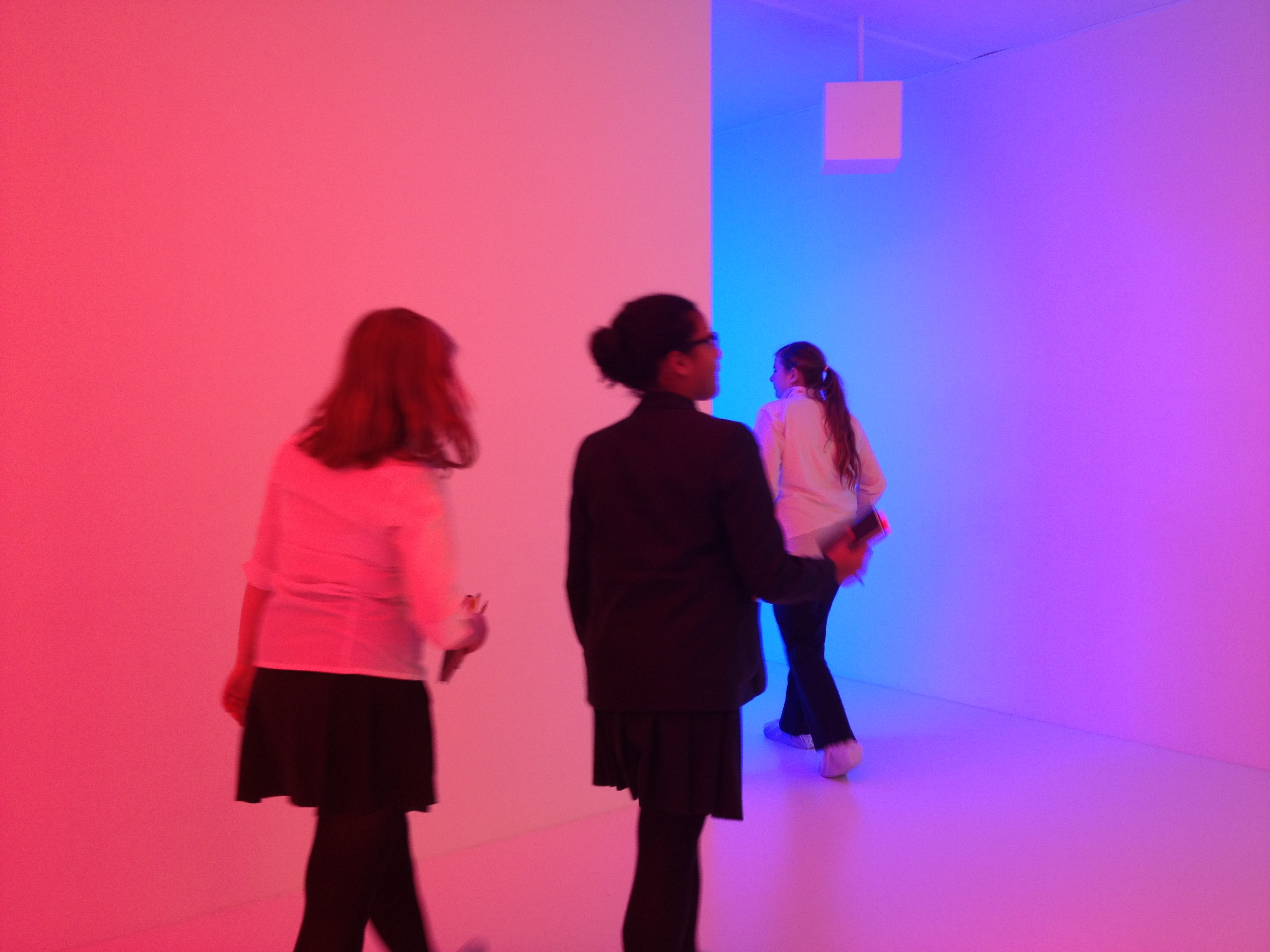 Between February and December 2013, the drawing shed developed an inter-generational project bringing together a diverse group of teenage girls and older people who reside in Hoe Street ward, Waltham Forest E17, through a series of interlinked creative and cultural activities.

IF…ISH New Experiences saw the girls collectively engaging in the research, planning, and participation of new cultural experiences. A Volunteer Agreement, signed by each participant and the drawing shed, marked the girls’ active participation and sustained commitment to the project and highlighted the projects’ model of co-production. Throughout the project the girls documented their experiences using a range of creative tools, including writing, drawing, photography and film, to develop content for a PROJECT BLOG. This engaged process opened up possibilities for an imaginative transmission of experiences and formed the basis of a series of communicative exchanges with culturally diverse older people within their own community, who, in turn, began to share extraordinary moments from their own lives. 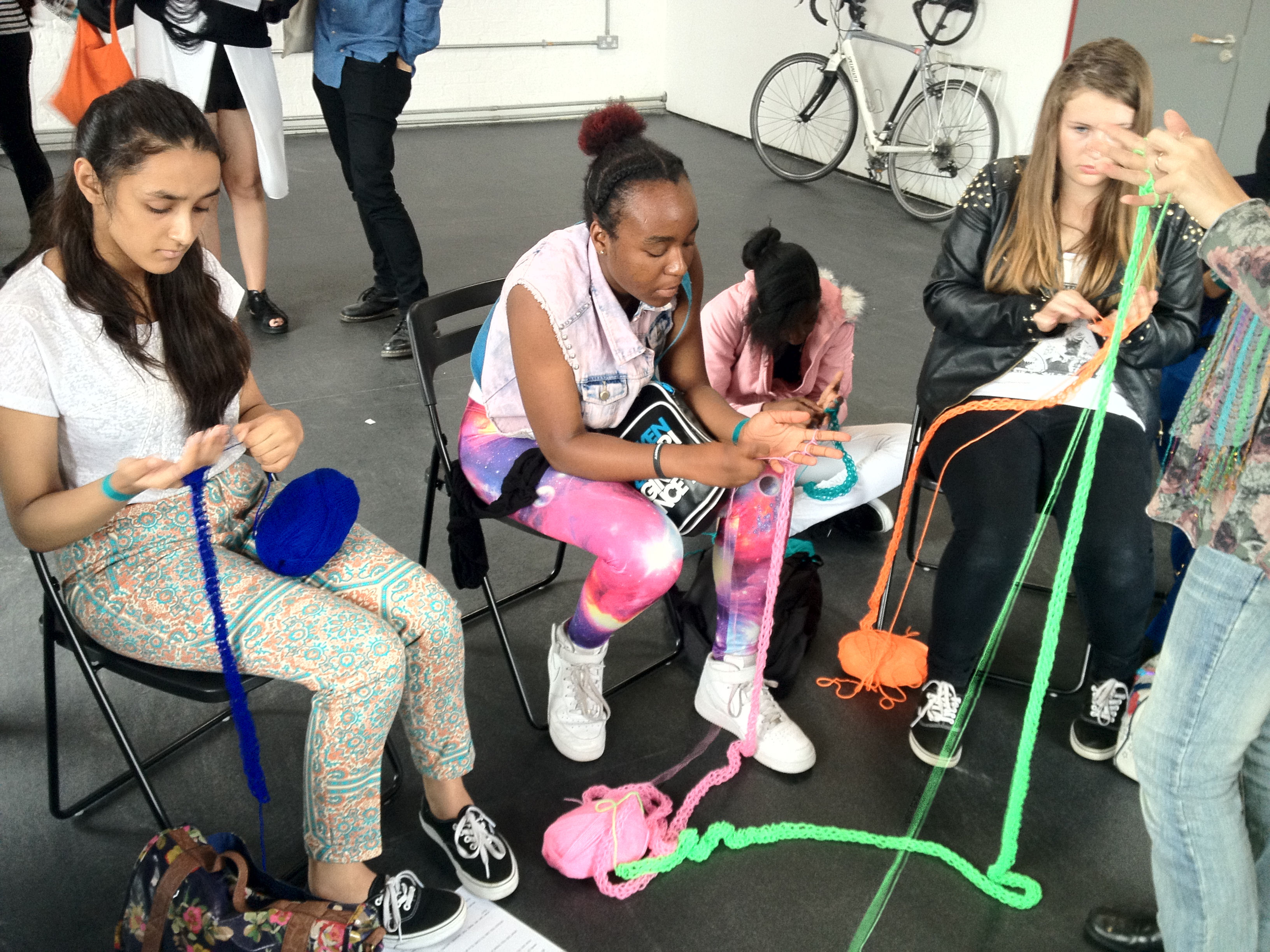 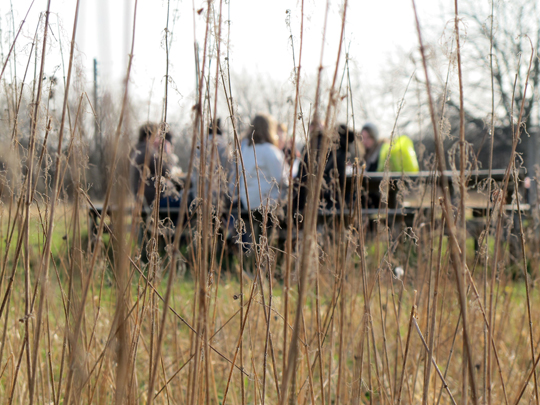 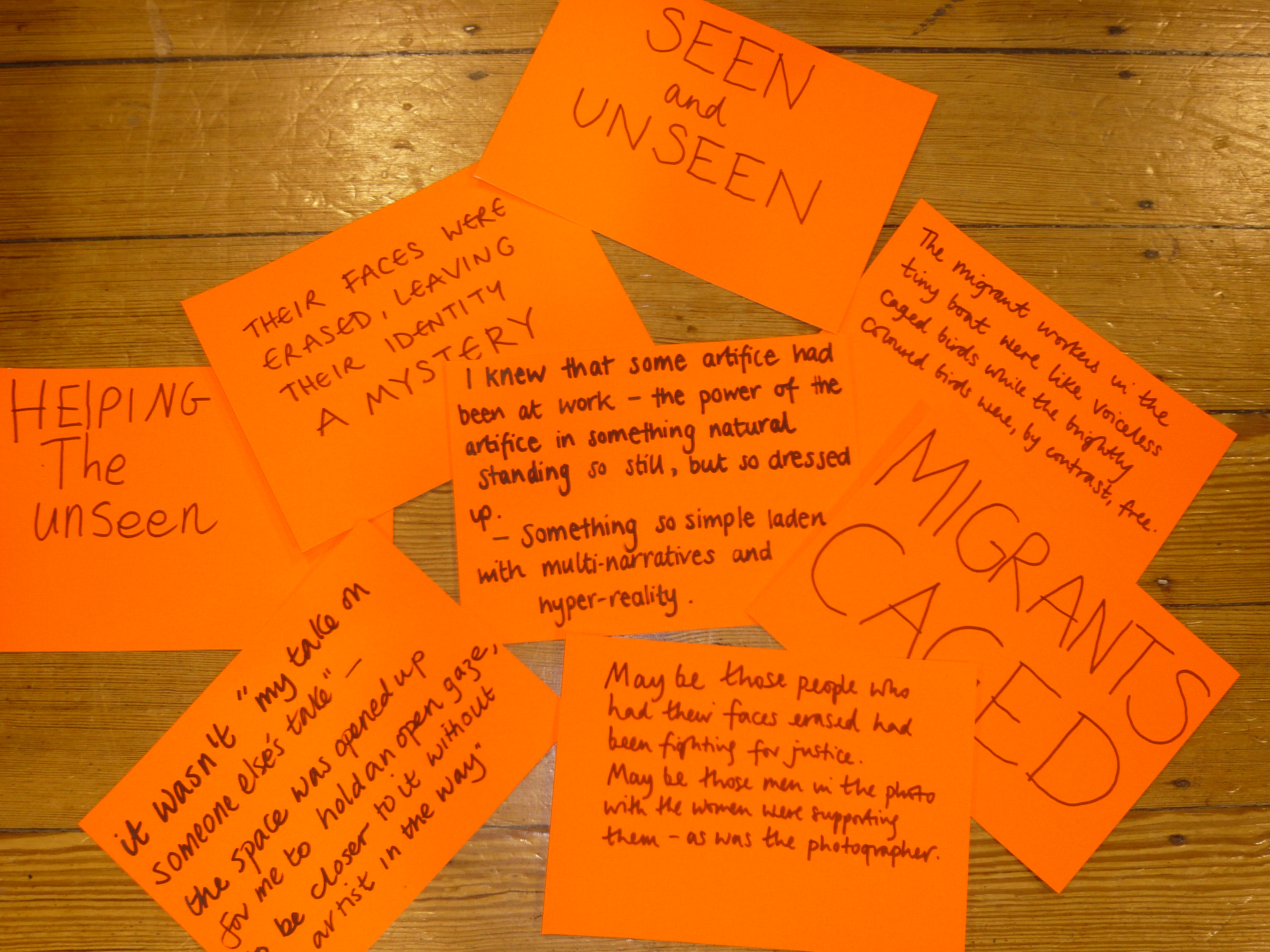 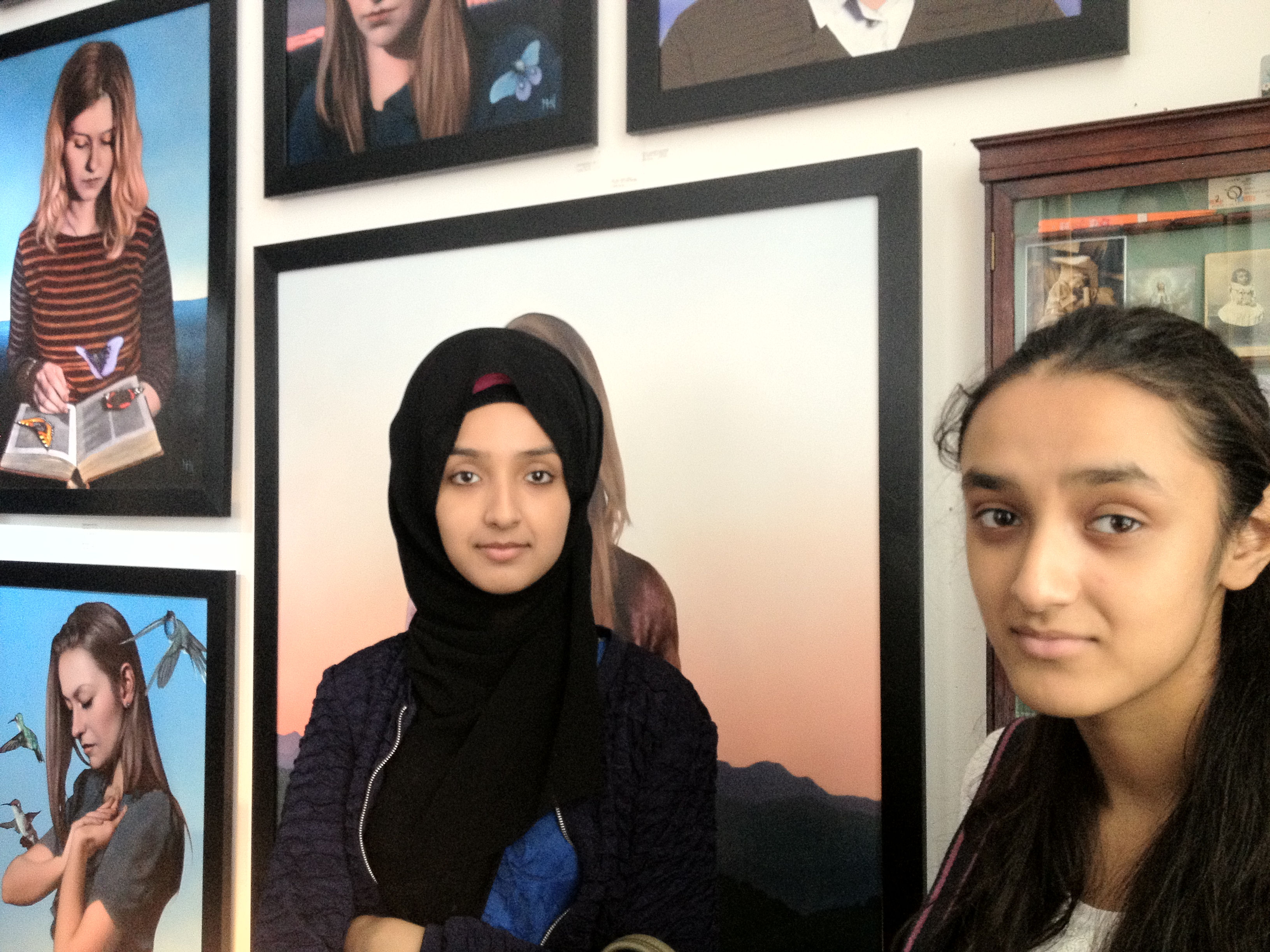 Do you ever go to cultural events, exhibitions etc with friends or family?
“I don’t go to many. I don’t think I have been to one recently, however I would like to go to more but I don’t have much connection to the outside world so I might need help in finding some.”

Do you like trying new things that you haven’t done before?
“I really don’t know I’ve just been one of those girls who aren’t afraid of trying new things. I find it good for myself because it boosts my confidence a lot more.”

“Yes I like trying new things because it takes me out of my comfort zone and allows me to believe in myself more and gives me confidence in things which I think I could never have done before. Prime example would be Hackney WickED Festival. I would never have gone there but when I went there the people were warming and I got a real buzz out of it.”

New Experiences
For the first new experience, on a day trip to Walthamstow Marshes the girls worked with local filmmaker Paul Fletcher to explore documenting their experiences using their mobile phones. The girls’ footage was compiled to create two short films which were subsequently screened at Walthamstow International Film Festival 2013. Watch the films here: Film 1 / Film 2.
As the project progressed the new experiences the girls engaged in included outings to an exhibition at the Hayward Gallery and a special event at the Victoria and Albert Museum, experiencing design, film, performance, photography and spoken word in an evening of activities that explored the hidden voice of women and how they express this through their creativity. Joining other members of the community in Walthamstow Town Square the girls watched a performance of Puccini’s opera La Rondine as it was screened live from the Royal Opera House, while at Hackney WickED Arts Festival they explored the Open Studios and participated in arts workshops, making Photograms and learning how to do Finger Knitting – a skill that was subsequently shared with members of the community and family members. During Words Over Waltham Forest festival the girls worked with local writer Nichola Charalambou to explore new writing techniques and creative responses to respond to shared words, ideas and objects, and joined an evening of poetry and music at Walthamstow Assembly Hall for An Audience with Carol Ann Duffy. For the final group outing, the girls collectively decided on experiencing Jonzi D – Lyrikal Fearta: The Letter & Broken Lineage, a choreopoetry hip hop dance theatre production at Sadler’s Wells, with a guest performance from spoken word poet GREEdS. 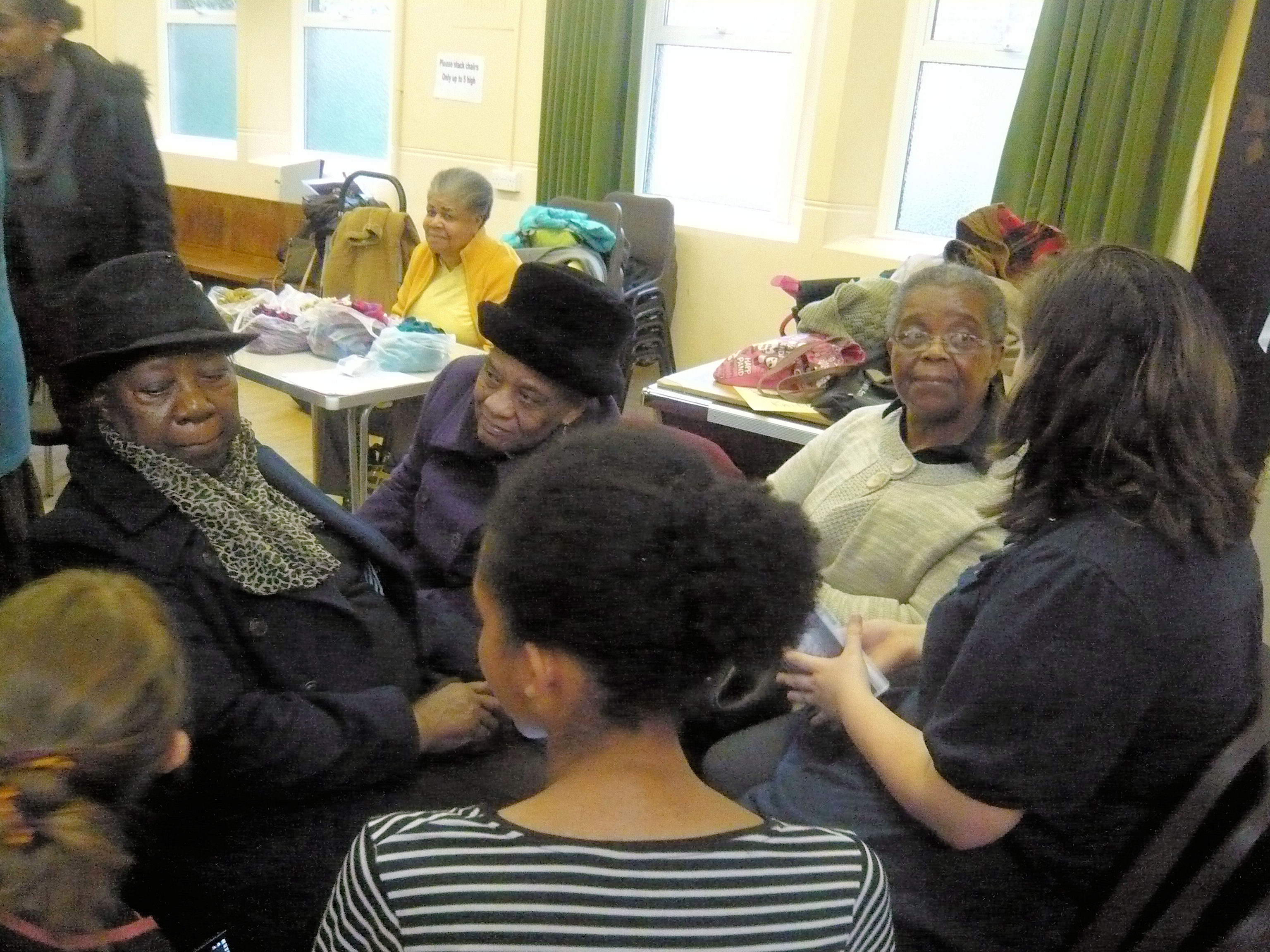 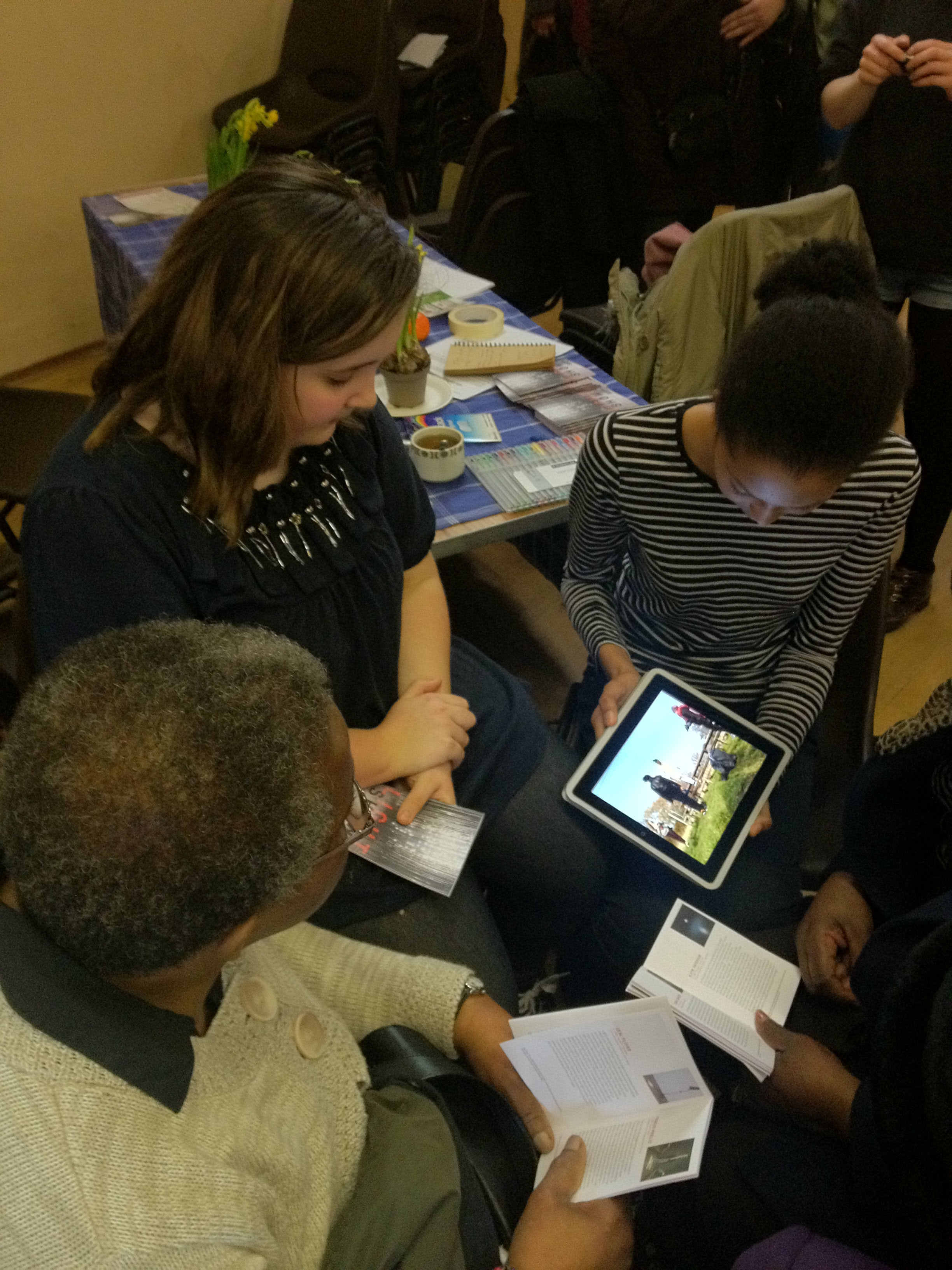 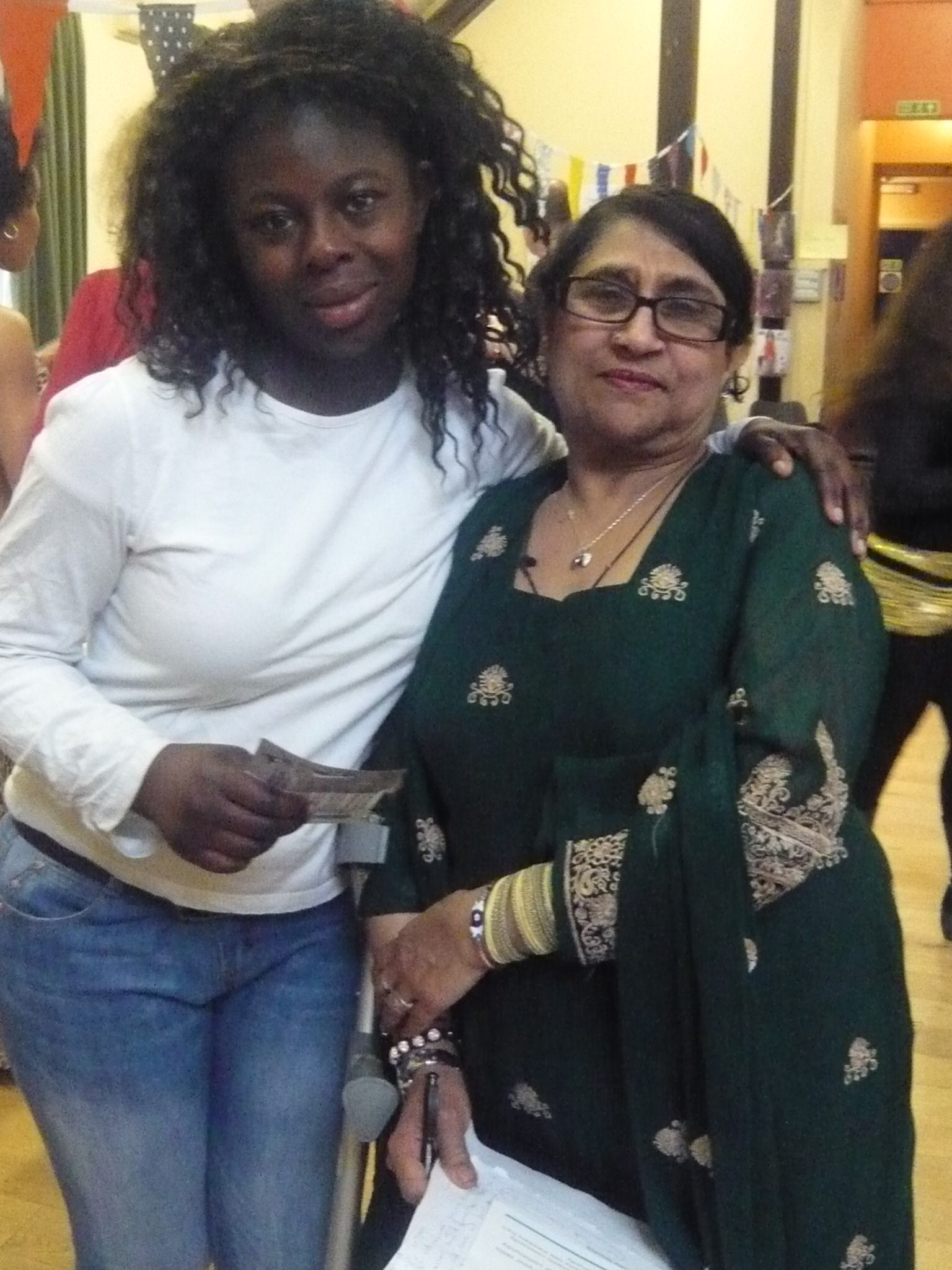 Inter-generational Exchange
The project integrated the girls’ introduction to high quality contemporary arts experiences with exploring and strengthening inter-generational relationships, opening up the possibility of meaningful engagement and increased understanding between older and younger local members of the community. Their reflections on their new experiences and creative content shared on the Blog served as a tool for instigating discussion and knowledge exchange in wide range of situations, structured and spontaneous, group-based and one-on-one.

At a community event at Greenleaf Baptist Church for International Women’s Day the girls participated in group skill-sharing with older Afro-Caribbean women and communicative exchange with members of the Waltham Forest Somali Women’s Association, in addition to numerous one-on-one interactions with diverse older individuals from the community. The girls also shared their experiences with a large number of older community members at the Walthamstow School For Girls annual community Christmas tea party.

During the outing to the Hayward Gallery, an interaction between one of the girls and an older male employee at the Hayward Gallery that began as initial exchange of responses to an artwork developed into sharing childhood memories and experiences of darkness and light in Sierra Leone and Ghana. Listen to a recording here: –
As a result of being involved in the IF…ISH New Experiences project, four teenage girls from the group also participated in the inter-generational Live Art writing project STRANGER : NEIGHBOUR. Working with the drawing shed, the national writing charity Arvon, and writers Jacob Sam-La Rose and Nichola Charalambou, the girls joined an intergenerational group for a 3-day residency at William Morris Gallery and Winns Gallery. Working individually and in groups, the residency enabled participants to experiment with writing on paper and old fashioned typewriters, and joined members of the community and a wider public in the digital ether for a TWITTER PERFORMANCE exploring the themes of home, stranger and neighbour. The participants worked with filmmaker Paul Fletcher who was commissioned to make a SHORT FILM in response to the project, and produced personal content for an anthology of the poems and writing created during the residency.

UNTITLED
I get out of bed and open my curtains
I look out the window,
I see the morning sun say good morning to me as
it casts its fresh yellow beams on my pale
colourless walls.

The playful breeze kisses my cheek as I look up to
see the birds flying high in the blue heavens.

I look through a different window,
I see a sheet of darkness,
Large flakes flutter to the ground like ashes after
flames, each with a different story to tell.

I stood there, viewing life through my frosted
window pane.

A HYBRID HOME
The birth of a new species, I think.
A hybrid culture.
A hybrid race.
How does one make peace with their predicament?
When ones mother was born
In a land where education is not free
Treatment is not free, water is not free
But it is her sanctuary, her escape, her home.
She remembers the vibrancy of spices, colours, clothes
Of long pastel sunsets set upon red barren land, waiting for dusk to appear
To break her fast with the ones she loves.

Funded by Well London and Arts Council England, the project was supported in Hoe Street by Walthamstow School for Girls and Paul Fletcher, E17 Films.